There's only one Warren Buffett (and it ain't you) – Trajan King

An excited friend sits down to tell me about this new stock trading platform founded by a Wall Street hot-shot. While working at a Wall Street investment firm this genius created an incredible algorithm that is able to picks stocks. It’s so advanced it can predict when a stock will go up and when it will go down. It was so successful that he left Wall Street and started his own company. Now he sells access to that same software to people who are serious about investing! It only costs …..

I’ve tuned out long before my naïve friend gets to the price. I’ve heard this story before. Many times.

The first time I invested was in the early 90’s when I bought shares of a mutual fund.  I’ve been an active investor ever since. Over the years I’ve heard this same story over and over from friends, family and in shady TV and internet commercials.

It’s the same story every time: You too can get access to the magic formula for investment riches. It’s so easy if you follow our magic algorithm. Logical people naturally ask, “If it’s so successful then why aren’t you insanely wealthy instead of spending time selling your secret sauce?”

The problem, of course, is that there is so secret formula to get rich quick. There is, however, a formula that’s not secret, for getting rich slowly.

Most of us don’t fall for that “secret formula” sales pitch about the savant with the software that can predict the winners and losers.  We fall for something much more subtle:

thinking we’re the geniuses who can discern the winners from the losers.

We pick our own stocks and mutual funds and in nearly all cases, it doesn’t go as well as we imagine. In short, we think we are just like Warren Buffett.  We read all the stock investing books, maybe even read the annual reports and 10-Ks. We spend hours and hours trying to figure out who the next big winner will be. After all, with access to all the world’s information, how hard could it be? Knowing how to invest like Warren Buffett is just a matter of Googling what he does, right?

Well, it turns out that replicating his results is very, very difficult.  So difficult that he’s world-famous for having done it.  Even Warren Buffett himself advises against it.

Giving a warning to investors, he said that “you do not want to ever get the impression that you can pick stocks” and that “can enable you to have an edge. It just doesn’t work that way.” 1

Even Wall Street analysts can’t do it

Wall Street invest firms employ teams of analysts, PhD mathematicians called “quants” and high-speed, fiber optic trading technology in an effort to pick the right companies and make trades in milliseconds. These are just some of the things you’re up against.

Teams of research analysts spend their careers focused on one particular industry. Most analysts are recruited from Ivy League universities and are top in their class. They go through a vigorous training program and work crazy hours for years as they work their way up to becoming anything but a grunt who reads financial statements, market reports and makes Excel spreadsheets into the late hours of every day (including weekends).

Analysts know the companies in their industry inside and out because they spend all their time reading their financial statements, participating in quarterly earnings calls, testing their products and even visiting the companies in person. They know everything there is to know about the companies they cover because they do it for years and decades. Even then, they can’t pick the winners.

If traders are the jocks of Wall Street, the Quants, or quantitative analysts, are the nerds.  You likely won’t see then in movies like “The Wolf of Wall Street,’ but they’re there.  In the background, crunching the numbers with their elaborate spreadsheets and computer programs.

Quants develop complex trading models to price securities and reduce risk. Much of this involves looking for inefficiencies in the market and trying to capture them before they disappear.

Entry level salaries are in the 6 figures. Even some interns make that amount of money. Why are they paid so well? They earn so much because they bring together the fields of computing, mathematics and finance, which is why they are usually PhDs. Not even an MBA is good enough to be a quant. These are smart, educated people who know their stuff.

In his 2014 book, “Flash Boys,” author Michael Lewis talks about the high-speed trading systems that allow Wall Street firms to have an advantage over the common investor. In the book he describes a fiber optic cable that is laid between Chicago and New Jersey so traders can cut the transmission time for data from 17 to 13 milliseconds. Eventually, a microwave link was established that allowed for less than 10 milliseconds. This is just one example of the technology employed by big investment banks to ensure their traders always have the advantage.

Thanks to all the technology deployed in the last 2 decades, we no longer see the hoards of traders on the NYSE or CME (Chicago Mercantile Exchange), like we see in movies like “Trading Places” or “Ferris Bueller’s Day Off.”  This is because computers have largely taken over most of this work.

It’s so difficult for investors to compete with these systems that Lewis even went so far as to say “the system is rigged.”  In other words, the little investors have no chance against the high-tech employed by these multi-national banks. 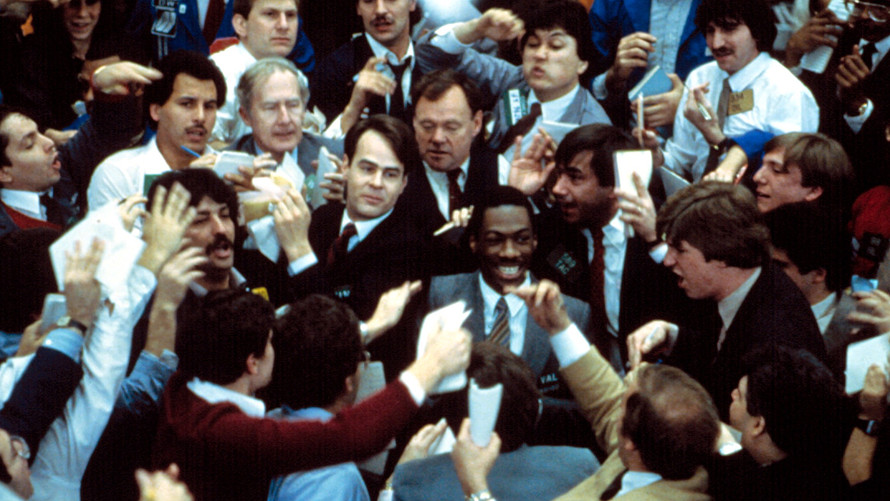 So with all those research analysts, highly paid PhDs, and the world’s best trading technology supporting traders and fund managers, how do they do against the broader market?

Terrible. The answer is “terrible.”

According to a research report from Standard and Poor’s, the chances a mutual find will beat the S&P 500 over a 15 year period is about 5%.2

Researchers also found that a fund that did well over a 3 years period, usually didn’t do well over the next 3 years (net of fees). 3

In other words, U.S. mutual funds don’t beat the market. Even with all that research, money and brain power, traders and mutual fund managers have a very tough time beating the market, especially considering fees, which eat into your returns.

The last insurmountable obstacle is the market itself, as described by the efficient market hypothesis or EMH. This theory states that it’s impossible to generate returns above market without taking on excess risk.  In other words, you can’t beat the market with the same level of risk.

These excessive returns are called Alpha. The measure of excessive risk is called Beta. To get more Alpha, you need more Beta. According to the theory, it’s impossible to get more Alpha without more Beta because the prices of every stock already accurately reflect all available information. Since all the information is reflected in the price, then it’s impossible to buy undervalued stocks or sell an overvalued stock, because they don’t exist.

There is one exception – that is inside information, which is illegal.  If you have information that is not yet public, then it’s usually not be possible to trade on because it gives you an unfair advantage, which is why it’s illegal.

The Efficient Market Hypothesis is controversial, with both believers and non-believers having plenty of evidence for their claims.  Those who don’t believe point to Warren Buffett as evidence that the market is not efficient and undervalued stocks exist. Otherwise, how would he be able to consistently beat the market?

Even Buffett says he’s an anomaly

Given all the forces working against you, and even Buffett himself says it’s very difficult for anyone to beat the market. A lot of people disregard his advice and try to be like him by picking stocks or investing in mutual funds. If you like researching stocks, tracking the market and spending your time trading, then go for it.  Just realize that you’re no Warren Buffett and statistically speaking you’ll most likely earn less money or take on unnecessary risk for that privileged, because Warren Buffett you ain’t.

And that’s okay. You don’t have to be.  After all, he spends nearly his entire day reading financial statements, which sounds incredibly boring to most people. Next, we’ll talk about the case for keeping it simple by investing in low-cost index funds. Something Buffett himself recommends.

Get on the newsletter email list to be notified when the next post in the Investment Series is live.

Further reading: “The Behavior of Individual Investors” from Berkeley