The rewards from learning a language are immense. It can be a way to experience a new culture, connect with people in a much deeper way and continue learning and growing personally.

My journey learning a language started when I was a boy.  My parents enrolled my siblings and me in French class. I remember learning the colors and that’s about it.  Later, I took 8th grade French where we watched a lot of videos featuring a dancing banana. I learned the word for banana, but not much else. I doubt the teacher even spoke French himself.

Why is it so difficult for kids to learn French in school?

It’s difficult for kids to learn a language in school because they don’t have a reason or a “why” motivating them. It’s hard to see the benefits of learning a language or studying any other subject when you’re in middle school.

I didn’t really learn the value of learning a language until I moved to Brazil for 2 years. Before I left I was enrolled in a 2 month full-time language course. We studied day and night. It was intense immersion! At the end of 2 months, my group moved to Brazil feeling pretty good that we could speak Portuguese fairly well.

We were in for a big shock when we realized speaking to each other was much different than speaking to natives. Gradually over the months I got better and better as I practiced and studied (more on that below).  By the end of my time I spoke so well most people thought I was Brazilian, despite my bright blonde hair (there are towheads in the south of Brazil who have German ancestry).

What was the difference between middle school and Brazil?

Having a purpose or a “why” made it easy for me to be motivated to get up at 5:30 am every morning for 2 years to study the language.

Having a reason why you do something is the driving force behind getting it done. The bigger and more important the “Why,” the easier it is to be motivated to achieve your goals.

So if you’re interested in learning a language, having a “why” is the first prerequisite.

The second prerequisite is humility. Even after studying and living in the country for 2 years, there were still times of frustration. Times when I’d be feeling pretty good about my language and after a few minutes of speaking, the person would turn to my native Brazilian friends and said something like, “What’s he trying to say? I can’t understand a word.”

Brazilians are known for being very blunt, which can really hurt your feelings if you let it. The better option is to use that kind of instant feedback as an opportunity to improve.

Hearing that you’re speaking incorrectly can be a blow to your ego. The thing is, it happens all the time. One day I had someone tell me I spoke like a native. No accent or anything.  Later that afternoon,  someone else said they couldn’t even make out one word I said.

If you’re going to learn a language, you have to be comfortable feeling stupid because it will happen all the time.

They will laugh at you

After learning Portuguese (and Spanish) my next language was French. I wanted to learn more than just the colors.  To do this I enrolled in an immersive course in Paris. After  a couple of months I thought I was doing well. One day in class, when trying to say the word for “vegetable,” I said “vegetable,” but with a French accent. My brain incorrectly told me that was correct (the correct answer is “légume”). 1

Again, things like that happen all the time. If you’ve ever learned a language you know what I’m talking about. Learning a language takes humility.

Get over feeling foolish and you’ll be much more successful. You’ll have the courage to speak every day, which is the next prerequisite.

Avoiding being uncomfortable is one of the largest barriers for people speaking a language. Since they don’t want to feel foolish, they get shy and don’t want to speak. I know many people who know the grammar of a language very, very well, but can’t speak at all.

The reason is when given a choice between studying and speaking, most people choose studying because it’s much easier than speaking. Reading about a language in a book doesn’t take courage like speaking does.  Speaking requires you put yourself out there and risk looking dumb.

Get used to it because you’ll look stupid. All the time. But it’s the only way you’re going to learn. 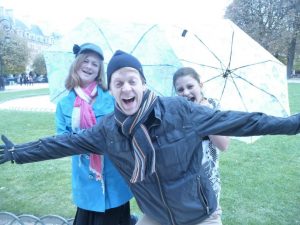 immerse yourself in the language

What’s the best way to speak every day then?  As much as possible, immerse yourself in the language. If you’re serious about learning a language and if it’s an option, move to a country that speaks it, enroll in a class and promise yourself you won’t speak anything but that language as long as you’re in the country.

If you have friends who speaks that language, commit to speaking to them in that language. Even ask for them to correct you when you make a mistake.  Otherwise, you may never know you’re saying something wrong. Keep the language on your mind as much as possible.

Second to total immersion, there are a few different techniques that will save you time as you ramp up your language learning. I’ll cover those in the next article: How to learn a language fast.

What’s your best method of learning a language? Comment below or email me here.

Video: Spencer Taggart’s speech on Strategic Marketing discusses having a “Why.”

Scott B. Young’s year long challenge to only speak the 4 languages he was learning