One of the greatest fears of retired people is running out of money. No one wants to run out of money after they’ve stopped working, especially not in the elder years. There are few things as dreadful as retiring and then being forced to work at Walmart in your 80’s. The stories about retirees living on cat food and social security are real.

It’s possible to run out of money if you don’t do the right calculations, spend all or get swindled out of all your money, or don’t have enough to begin with. Several studies have concluded that 4% is a reasonably safe withdrawal rate so you never run out of money. It’s known as the 4% rule. Where did it come from and how does it fit into a financial plan?

Let’s go through some important numbers to figure out what it takes to become financially independent and stay that way.

Let’s start with how you accumulate enough money to retire, whether it’s at 30, 65 or 80? Despite what the government actuaries tell us, retirement isn’t an age. It’s an amount.

Financial gurus like Suze Orman will tell you it takes $10 Million to retire. Others may say only a few million because “a million doesn’t go as far as it used to, amiright?” As we’ll see below, those numbers are ridiculous. If that were the case, no one would ever be able to retire or become financially independent. Those numbers are about as arbitrary as the retirement age.

We can possibly thank either the conservative Iron Chancellor, Otto von Bismark for setting the retirement age at 65 in 1889 when Prussia set up the world’s first retirement system or just the actuarial tables established by many U.S. pension systems in the early 1900’s that concluded the same thing the chancellor did: 65 is a decent age for a pension system that can pay out more than it brings in. Of course, since social security was established in 1935 a lot has changed since then, which is why it’s currently in trouble. 1

In other words, the retirement age nearly everyone shoots for is entirely contrived and based on a world and it’s technology that’s nearly a century out of date. When social security was established in the U.S., the average life expectancy for a man was 58. 2

Take care of yourself

If you count on the government to take care of you, then the age at which you can retire depends on whatever the social security system says it is. A number that changes depending on the year you were born and how much money the system has.

If instead, you want to take matters into your own hands and control when you retire, how much money you have at retirement and what your lifestyle is, then retirement is an amount. It’s an amount of money saved that can reliably provide an income stream to cover your financial needs.  In other words, it can pay for financial independence.  An amount that is unrelated to your age or whether you want to keep working.

The simplest way to calculate how much money you need is to use 2 numbers: 25 and 4%. First, take your yearly expenses, or rather, how much money you need to live on per year when you’re no longer working. This number could be much lower if you plan to keep working for a while or plan to work part-time or semi-retire since many people love the work they do, especially if they work for themselves.  Then, take that number and multiply it by 25.

Let’s say your annual expenses are $40,000.  That number times 25 is $1,000,000. You’ll need that much money to be financially independent.  Of course, that number is lower if you get a pension, retirement or other income stream from a business or elsewhere.

The 4% rule. This number is widely regarded as the safe withdrawal rate to use to ensure you never run out of money. In other words, you can live on the interest and never dip into the principle, no matter how bad the market does. So where did this number come from and how reliable is it?

This 4% is made up of interest and dividends. Depending on  your portfolio, it could be made up entirely of dividends and all the interest is reinvested.  If you hold a broad market index fund, like VTSAX, dividends will account for about 2% of growth, so you only need to take out another 2% of earnings each year.

The 4% rule was first proposed in an article by financial planner William Bengen in October, 1994 Journal of Financial Planning  3 and replicated in 1998 in the famous Trinity Study.

Bengen looked at all the periods of the modern stock market since 1926, including the great depression, and found that one could safely withdraw up to 4% each year and not run out of money. The 2 exceptions were if someone lived in Germany or Japan during WWII. In other words, if you live in a country that’s currently losing a world war, don’t take more than 4% money out of your account. You can only take out about 1.5%.

Keep in mind that this withdrawal rate only works for a relatively conservative portfolio, like an index fund where at least 50% of the holdings are stocks. A highly risky or volatile portfolio may not perform as well. (Like if you have 90% Bitcoin. You could be broke next week.)

To calculate what percentage you can safely withdraw without risking running out of money, the updated Trinity analysis provides this graph showing what can be safely withdrawn for different portfolios: 4 : 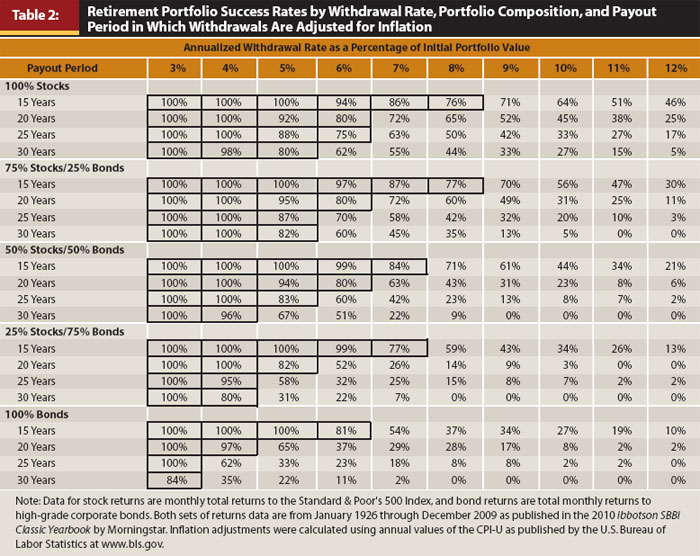 The last important number is the savings rate. Elementary school math tells us that the higher our savings rate, the faster we’ll accumulate money. Saving 50% of income means for each month that goes by, you’re saving 1 month’s living expenses.

A 0% savings rate, of course, means you’ll never have any money. Most Americans are slightly above this rate as the average savings rate in the U.S. varies between 3% and 6%, depending on how rich people feel.

What if you saved 10% each year? A number promoted by most financial planners. It would take you 51 years to have enough to be financially independent. If you want to cut that to 10 years of savings, you need to save 65% of your income.

That may sound crazy, but a lot of people do it. They do it by cutting their expenses, which is much easier than trying to earn more money. The reason being is that for every dollar cut in expenses, you double the effect: your savings rate increases and the amount you need to save to cover your expenses decreases.

Let’s bring this all together into 1 magic formula. What does it take to become financially independent?

Reduce living expenses and increase savings as much as possible, ideally save 50 – 75% of your income to build a portfolio that’s 25 times your annual expenses, so you can withdraw 4% from your portfolio to never run out of money.

Ok, so it’s not really a formula, but a sentence that represents a lot of data and research on what it takes to be financially independent and stay that way. It’s not easy to save that much money, but necessary to reach financial independence sooner, rather than later.

What do you think of the 4% rule? Does it seem low? What are you doing to get to financial independence? Please share your thoughts below.

For more in Financial Independence, refer to this section.

For more on the Trinity Study, see these articles: